Graveyard on irregular-plan, laid out c. 1600. Now out of use. Contains a collection of multidenominational cut stone gravemarkers (upstanding, recumbent, and table-type memorials) mainly dating from c. 1750 to c. 1900. Two ashlar limestone mausoleums (on square-plan) to the north of site, dated 1835 and 1898, containing the remains of the Barton family. Rubble stone scalan (covered altar) to the north-west corner of enclosure, built c. 1800, having segmental-headed arch over with roughly dressed voussoirs to arch and with cut stone altar/seat to interior. Site surrounded by rubble stone boundary wall having castellated/Scotch coping over. Gateway to the east comprising a pair of rubble stone gate piers (on square-plan) having pyramidal coping over and with wrought-iron flat-bar gate. Stile located to the east side of gate. Site of earlier church to centre (RMP DG105-003001-) to centre, and remains of ringed cross (RMP DG105-003002-) to site. Located in an elevated site in the rural countryside to the north of Pettigoe.


Although perhaps primarily an archaeological complex, this interesting and complex site retains a number of features of post-1700 date and interest. The interior contains an interesting an varied collection of cut stone gravemarkers dating from the mid-eighteenth century to c. 1900, some of which are of artistic interest, particularly a number of now weather eighteenth-century memorials with carved coat-of-arms to the heads. Apparently one side of the graveyard was used for Church of Ireland burials with Catholic burials to the other side. Of particular interest is the scalan shelter built into the north-west corner of the graveyard, which is now a rare survival. A scalan is a sort of covered mass rock dating from Penal times (c. 1691 - 1829) during which, at various times, it was illegal (on pain of death) for Catholic priests to celebrate mass. Subsequently mass was celebrated in remote and inaccessible areas, such as here at Carne. The scalan consists of a flat altar with a segmental-arched hood over that partly sheltered the priest from the elements. Apparently, this particular example is relatively late in date and was originally built to shelter the priest as he collected offerings at funerals. A pair of austere but well-crafted ashlar limestone mausoleums to the north of the graveyard were originally erected by the Barton family of The Waterfoot and of Cloneely, which are just over the border in County Fermanagh to the south. The Barton family was an important and interesting family that counts a number of notables among its ancestors, including Thomas 'French Tom' Barton (born December 1695 at Pettigoe) who established the firm that was later to become the famous wine merchants Barton and Guestier, c. 1730, at Bordeaux in France. Also buried here at Carne is Prionsias Dubh 'Black Frank' McHugh, the noted eighteenth-century highway man who operated in this part of Donegal who was hanged in Enniskillen in 1780. He is remembered fondly in local folklore and song as a chivalrous man who stole from the rich to give to the poor. Also probably buried at Carne is the Revd. Alexander Calhoun, who was rector at Templecarne parish from 1698 until 1717, and who was the great grandfather of John Caldwell Calhoun (1782 - 1850), who served as Vice President of the United States from 1824 to 1892 under President John Quincy Adams. The graveyard also marks the final resting place of the c. 70 pilgrims who died when their boat sank on Lough Derg in July 1799 (or 1795, date varies). This site is also an important and early archaeological site, reputedly originally dating to the early Medieval period and associated with St. Davog. An early pilgrim route to Lough Derg ran past the church. A shallow rise to the centre of the graveyard marks the site of a church (RMP DG105-003001-) apparently built at the end of the fifteenth century, while a ringed cross (RMP DG105-003002-) to site was apparently taken here from Saints Island in Lough Derg. The site is also of historical interest as the location where the first Red Hugh O'Donnell resigned his chieftaincy in 1497 (according to the Annals of the Four Masters). This interesting site is an integral element of the built heritage, archaeology and social history of the Pettigoe area, and is a feature of some interest to the north of the town. The simple boundary walls (probably containing fabric of the church to site) and the gateway add to the setting and context, and complete this composition.

Department of Arts, Heritage and the Gaeltacht, Ireland

The content of this website is copyright of the Department of Culture, Heritage and the Gaeltacht. Content and images may be used for educational or private purposes, with acknowledgement to the NIAH. 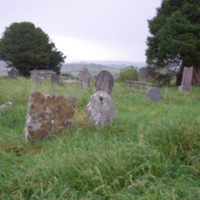 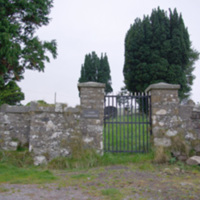