A collection of items detailing the medievalisms of Lough Derg's pilgrimage, the continuing process of creating the Middle Ages through the lake and its islands. 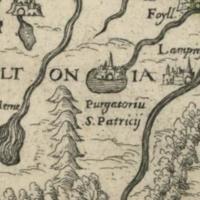 A map of Ireland including the prominent location of The Purgatory of Saint Patrick.

The lakes of Ireland

Gerald of Wales describes the number and disposition of Ireland's lakes

It is traditionally believed that a monastic settlement was founded on the nearby Saint’s Island (formerly St. Dabheog's Island) in the fifth century by St. Patrick who installed Dabheoc as the first abbot (see…

A debate over the reliability of oral history, in which O'Donovan cites the heterogeneity of County Donegal local stories

"In nine cases out of ten, the legend is simply an attempt made by an unlettered, but imaginative people, to account for natural appearances by supernatural agency"

A description of the power given to unexplained natural phenomena in Irish folklore, and the character of the storytellers

Fionn Mac Cumhaill and the worm of Lough Derg

Dutch Map of Ulster with Purgatory 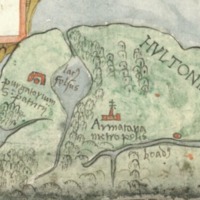 Curator's description: "In 1577, at the age of 63, Adriaen Coenensz from Scheveningen, a Dutch fishing port, started his Vis booc. Over a period of three years he collected all kind of information about the sea, the coasts, and coastal waters,…

A description of the timeless nature of Lough Derg, a window into the early days of Irish Christianity

"Shaking the very stars with their fusillades of Paters"